東方運命の星 (Touhou Unmei no Hoshi) is a Touhou fangame made with the PICO-8 fantasy console, where you shoot bullets at the enemy whilst avoiding getting shot yourself.

As PICO-8 is a rather limited console, the game contains the following features:

And the following mechanics:

If you liked this game, please consider donating by buying the game, or buying me a Kofi. It really helps! 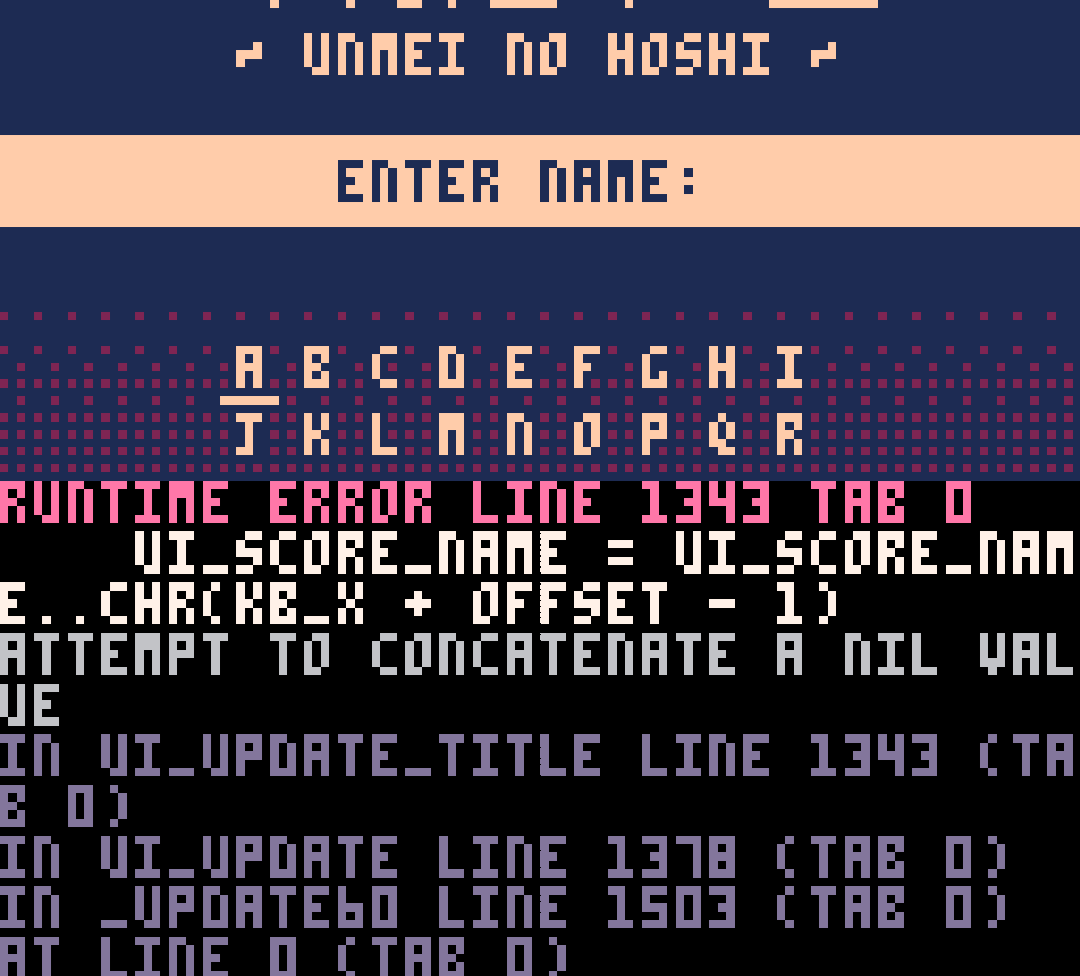 Lovely game! I included it in my last video

Good effort but my eyes were distracted from the bullets by the fast, bright background, I don't like auto-focus while shooting, bombs are boring when they're just a bullet clear, and character movement is just slow.

It's PICO-8 Touhou, what's not to love! Thanks for making this, I just bought the soundtrack so that I can make one of the songs my ringtone.

I can't start the game?

so far what i've learnt:

green dot on the character sprites are hitboxes.

Wow. You auto focus while shooting? Bombs not able to damage the boss? The screen is also too small. I can't even pass the first boss. Complaints aside, this is very well made. Maybe add some improvements and it'll be ok.

I did a playthrough on this game, and while not bad at all, needs some improvement.

1) No visible hitbox or hitbox. This is a big factor in touhou games, and while this game uses a pixel like design, a hitbox or a location of the hitbox should be shown.

3) No slow button. Speed matters. It can be the difference between surviving and losing a life. If you stop shooting to dodge bullets, the time taken to kill the boss is far, far longer.

There were some things i did like about the game, that being the soundtrack, which was very well done! The art was impressive, especially the danmaku patterns, and is quite good for a fangame. Personally i would suggest adding dialog boxes, or spellcard effects (E.G Marisa's master spark shoots a rainbow) Or more stages! Pre-stage bosses, while not mandatory, are welcome too :)

This game is alot of fun, it is a bit hard but atleast it's not as hard as pogostuck

This game is your average space invaders on steroids. its insanely hard and i couldn't beat it.... but the overall game is fun. Controls are able to be improved tho.

moving is floaty and there’s not a focus button?, i don’t know if not being able to focus is intended but please make movement less floaty and more responsive if possible.

I think the character needs to be able to move faster and... y'know... shift to slow/focus like usual?

It's a fantastic game! I do seem to have trouble getting past Meiling's Wind Chime Spell Card though....

i liked this a lot!

Good Lord, I can't even beat the balcony on practice mode. Great job.

By the way, bombs still don't refill after practice.

Thank you for notifying me, I will release a patch as soon as possible!

It has been patched!

Very fun. :D I need to spend some more time with Pico8.